Lots of otherwise healthy felines have digestion issues that might be helped by adding a little cooked pumpkin to their canned or raw food. Some cats like it so much that they will eat it by itself, especially if it's slightly warm. Most dark orange winter squash is sweet and it's great for a warming soup or creamy risotto. Roast one one a blustery evening and save some for kitty!
﻿ 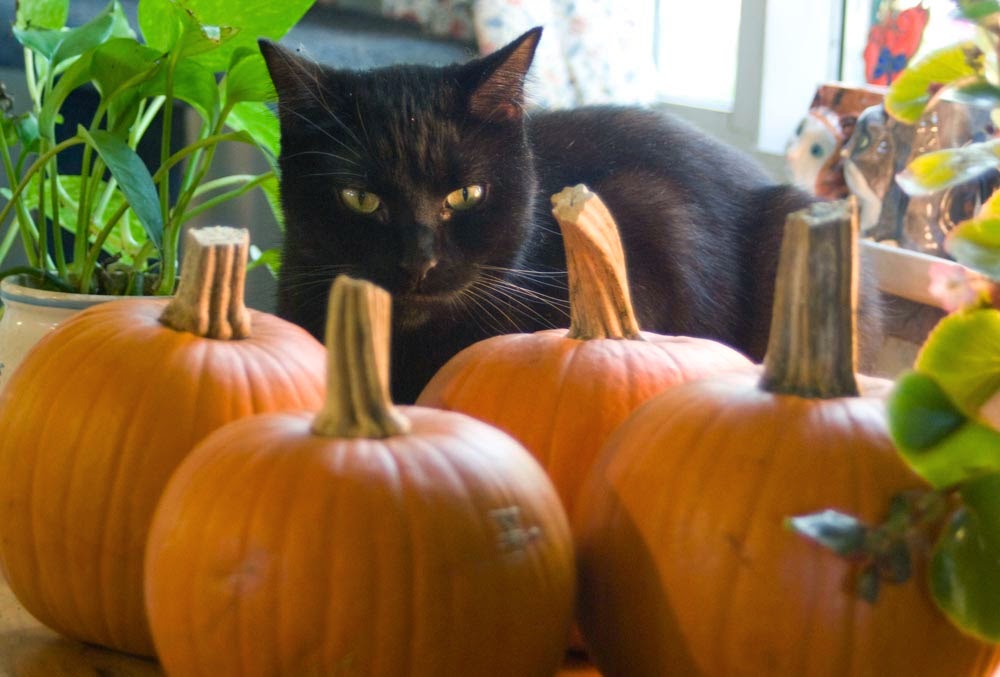 Posted by Diane Venberg at 3:28 PM No comments:

Caring people all over the country are fed up with cats being killed. Trap/Neuter/Return (TNR) sterilizes free-roaming cats and returns them to their home in the community in place of old-school "catch and kill" animal control methods of the past. Check out this piece about certain areas of Las Vegas attempting to make this change to save lives and as the article points out, save money in the process as well.

A National Feral Cat Day tradition of mine has been to spotlight one special "feral" kitty; this year we hear Rosemary's story. Fourteen years ago I often volunteered my time doing TNR for individuals feeding outdoor felines but unable to do TNR themselves. This particular site was at an apartment home of a senior couple. The wife was struggling to care for her elderly husband and knew they probably wouldn't be living independently for much longer. A short little tabby had had at least three litters and those kittens had all disappeared, many likely due to predators since this was prior to the massive development in Redmond.

I trapped Rosemary on a Sunday and took her into a private vet clinic the following day to be altered and vaccinated (this was before the Feral Cat S/N Project offered so many surgery days). I phoned at noon to see how the kitty was doing and was told she was far too pregnant to spay! So I brought Rosemary home and set up a large cage with lots of blankets and covered half of it for privacy. I was working during the day so she had a nice, quiet environment without other cats but still Rosemary growled and hissed at me at every opportunity. By Wednesday she delivered six kittens! I gave her lots of food and changed the blankets as best I could without disturbing everyone. One kitten died within two days and I had to extricate his little body out of the cage with Rosemary understandably attempting to lash out at me. After a week or so I began to gently handle the kittens and take them out of the cage for short stints. I don't remember when Rosemary stopped growling and hissing but at some point she started trusting me enough to pet her but didn't want to be picked up or restrained in any way such as a hug. I was able to let her and her family have the whole room without being kenneled. Sadly three more boys passed away, leaving one boy and one girl. The remaining boy was very ill and a vet I saw (the practice is out of business now fortunately) told me he would die as well and that there was nothing they could do. That little guy recovered and ultimately found a home where he is the center of the universe. The little girl, a tabby like her mom, was placed in a loving home as well.

Rosemary was spayed and happily lived outside for three years. Then one December she was apparently attacked by a a vicious dog and badly shaken. The wonderful doctor whom we still see to this day performed an intense surgery to repair the damage and sent Rosemary home with an elastic sweater, antibiotics and a pain patch. Clearly this kitty would no longer be going outside! I honestly didn't know how Rosemary would react to being inside, plus she had to spend her recovery in my bathroom so that she couldn't jump and she had even less space to move around. I was amazed - she was absolutely the best patient I could ask for and her injury healed superbly. I guess Rosemary had been an "owned" kitty once, perhaps in the beginning of her life and it all came back to her as the two of us fell in love with each other. Everyone who meets Rosemary falls in love with her. She's adorable and responds to stroking with deep purring. Its difficult to believe she is the same wild cat who used to pop me in the face if I got too close!

Every cat has a different story and while we can never know what they've endured, we can work to make their lives as rich and fulfilling as possible. For some cats that means an outdoor home with warm blankets and daily meals; for others that might mean the spot on the pillow beside us at night. 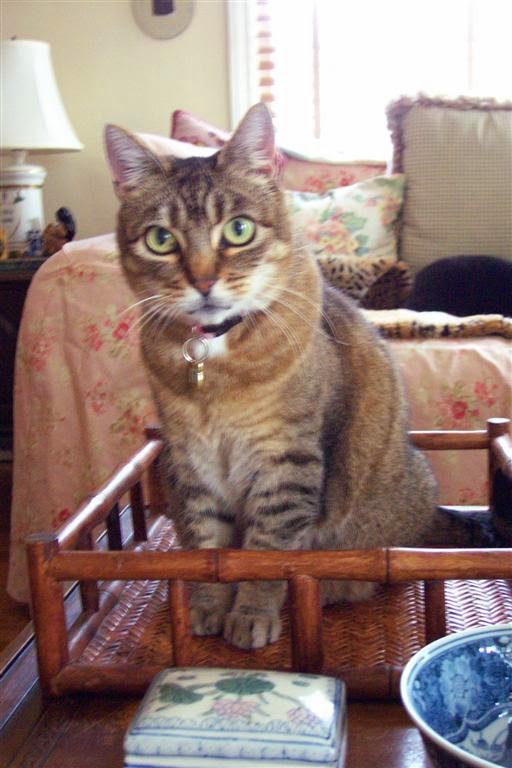 Life is life - whether in a cat, or dog or man. There is no difference between a cat or a man. The idea of difference is a human conception for man's own advantage. - Sri Aurobindo
Posted by Diane Venberg at 9:34 PM No comments: 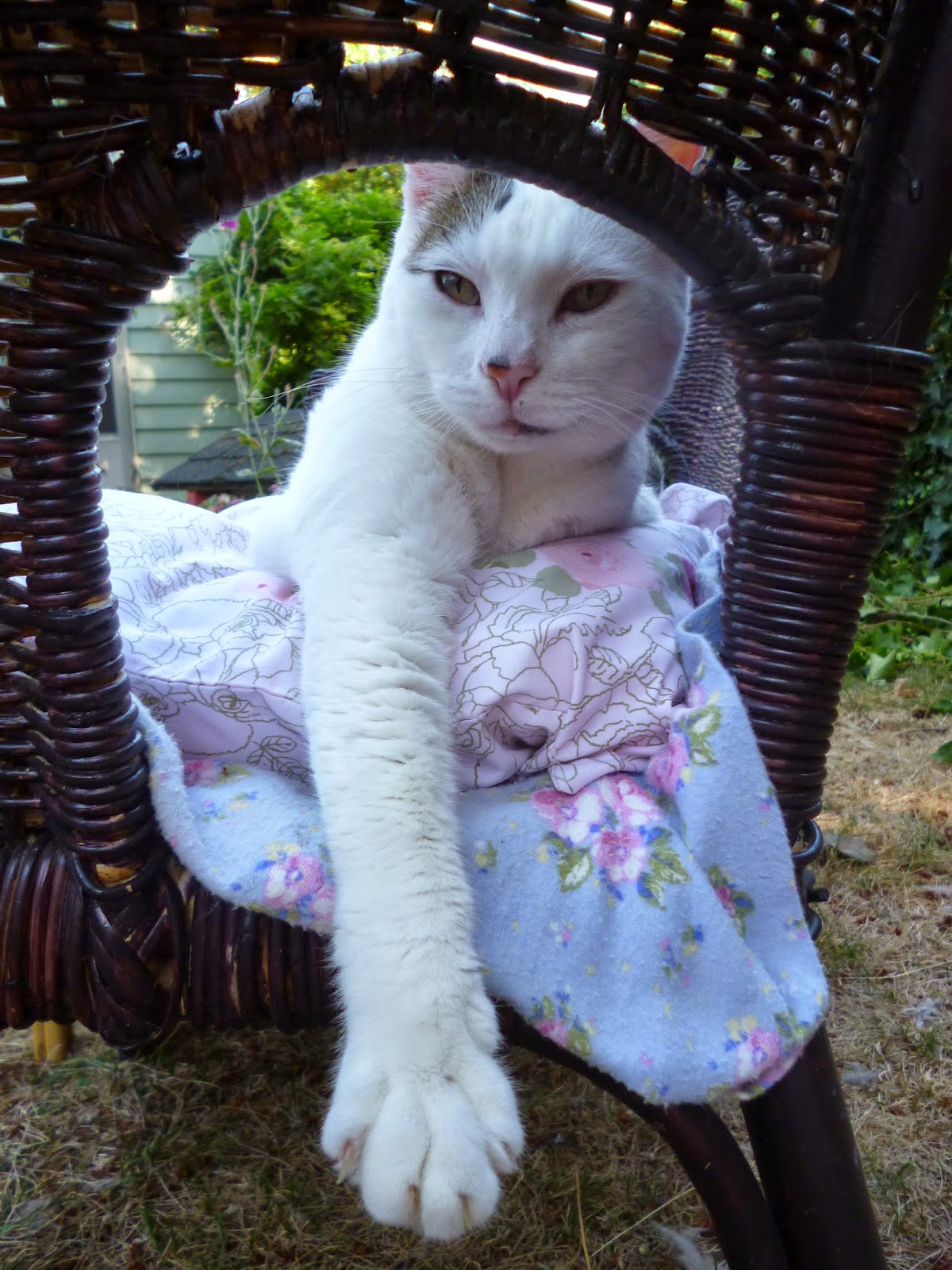 Here's Sidney enjoying one of the last warm days outside, just chillin'.
Now that Autumn is officially upon us it's almost time to start planning your holiday travel and winter get-aways. KittyStar always books up for Thanksgiving and December holidays, so be sure to reserve kitty sitting well ahead of time. Happy Fall!

Posted by Diane Venberg at 4:46 PM No comments: