Why We Need Kitties

It's easy to feel disheartened and depressed about the treatment of animals in the world today. The U.S. senate and house just passed a law allowing trophy hunting of wolves, bears and other wild animals on federal wildlife refuges in Alaska. (Even though a place of refuge literally means shelter, protection and safety!) Arkansas just signed an "ag-gag bill" meaning factory farms in that state will be protected from any nosey folks who might care enough to monitor them for animal cruelty. 2018 Olympic Sponsors such as McDonald's are ignoring the fact that South Korea is a nation where torturing dogs and cats before slaughtering them to eat is a commonly accepted practice. See Korean dogs and cats to sign petitions and participate in boycotts. This is when giving your own companion animals an extra hug and treat is about the only thing that will make you feel better. And watching funny kitty and puppy video clips.

Living in Seattle insulates us from a lot of the ugliness surrounding current political and cultural issues. Other than the high cost of living and insane housing market, most of us can appreciate having like-minded neighbors and co-workers. Indeed, this city is a pretty ideal place to live if you are a dog or cat. The Feral Cat Spay & Neuter project recently celebrated their 100,000 spay/neuter surgery since being founded 20 years ago. They've done almost 1,000 surgeries in 2017 so far! (Visit FCSNP for upcoming events, such as their Spayghetti & No Balls dinner.) Looking at how cats are faring overall in the U.S., we can be thankful that trap/neuter/return (TNR) and more evolved attitudes towards cats in shelters are now the norm. Animal welfare groups and shelters are overwhelmingly embracing TNR, except for the outlier organization People for the Ethical Treatment of Animals which still harbors the antiquated belief that community cats are better off dead. For an interesting view of cats in history and what the future may hold for cats, read Becky Robinson's fabulous essay in the National Geographic Cat Watch. We can also be grateful for Cat Daddy Jackson Galaxy for being a staunch advocate for socially challenged cats and actively working to change the fate of many shelter cats across the country. He will be gracing Seattle with a personal appearance on June 8th; register here to see him: Purrfect Pals.

So be aware of the state of the world, do what you can and donate money when you can, but most of all, love the animals in your life. Being with adorable furry creatures is not just a simple pleasure -it should be part of every one's mental health plan. I believe all animals are "therapy animals." 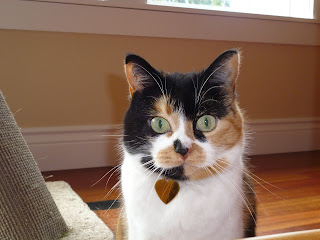 Posted by Diane Venberg at 9:03 PM No comments: