Every October 16th, I write about the underdog kitties, the cats most shelters kill, often even before a stray hold is up because they may pose a "danger to the staff." One this day, we fly the feral flag for the felines who may technically be homeless, the"community cats," the shadow cats sleeping on porches or in garages and being fed by caring folks who have a soft heart. These cats are often held responsible for dwindling songbird populations, messing in gardens, and creating havoc for the indoor cats who see them in the yard. People might think they are doing the right thing nabbing a stray cat to take him to the local shelter. The reality is that between 60-70% of cats who end up in shelters do not make it out alive.

The term "feral" can mean many different things to a variety of people. I've seen the most gentle kitties turn absolutely livid at the vet's office and I've seen undersocialized cats remain stoic and almost catatonic during an exam, nail trim and blood draw. An animal shelter is usually full of strange sounds, sights and smells, such as those of dogs who are natural predators for cats. Very few cats will be able to relax in an environment like that. Shelter vets and staff do their best to evaluate temperaments but they may be rushed, exhausted, more skilled with understanding dog behaviors, or the shelter may simply be full up to capacity. Modern shelters are moving to group housing instead of individual caging, so that potential adopters can see how the kitties interact with each other and in a more home-like setting. But even then, some cats will choose to hide from new people and people are naturally attracted to the friendly or exotic felines. The shy kitties don't get picked for off-site adoption events or public appearances either. So you can begin to see how challenging it is to be a sensitive kitty vying for a great home when the odds are stacked against you from the get-go. Such is the case of Howard and Charlotte, two kitties I have the honor of sitting for.

We will never know where Dorothy came from but given how social she was once she was given a real home she was likely left behind when someone moved or dumped off once they realized she was pregnant. Howard and Charlotte, along with their siblings, ended up being very fortunate little kittens and were rescued from a life outdoors along with Dorothy. Not all of the kittens found a home immediately but at least they were well fed and warm (and spayed/ neutered). Then a miracle happened and the remaining kittens DID get homes, and Howard and Charlotte and Dorothy were reunited! Read the full story below, as told by their wonderful (human) mom and a friend to all animals as well. 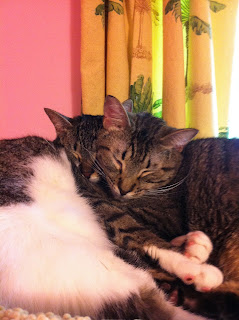 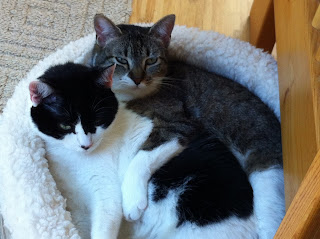 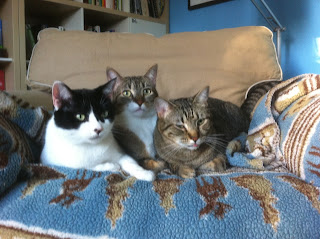 Seven years ago, the cat who would become our kitty Dorothy had kittens in my dad’s woodpile in Vancouver. She wasn’t a feral cat, but was definitely a shy stray.  She had previously had another litter of kittens in my dad’s yard, but was only seen when she was moving the kittens out.  Sadly, we don’t know the fate of those kittens.  However, when Dorothy was discovered with another batch of four babies, my stepmom went to work on socializing her.  My dad moved the kittens to a sheltered bed on their covered porch, and Dorothy would come to tend her babies there where it was dry and warmer.  It was November and the weather was starting to turn colder.  My stepmom could have gotten the kittens to a shelter earlier, but she wanted to keep Dorothy with them and Dorothy was not ready to be captured.  After a few more weeks of a lot of care and love, and with a large snow storm looming, my stepmom was able to get all of the kittens and Dorothy into a carrier.  My dad and stepmom were concerned about their elderly indoor cats and weren’t comfortable bringing the cats inside their house, so we came up with the best plan we could at the time.  Working with a shelter, we decided that the kittens would go into foster care and be put up for adoption, and that my husband and I would come down and adopt Dorothy, the mom.  At the time, we already had other cats and a dog and didn’t feel that we could adopt all five of the new cats.  So, on Christmas day, a volunteer at the shelter opened up for us and we were able to bring Dorothy home.  We kept in touch with the shelter, and one of the kittens was quickly adopted.  We were assured that the other three would also quickly get homes.  The kittens were shortly removed from the website and we assumed they were adopted.  Dorothy, meanwhile, had blossomed to be one of the most affectionate cats we have ever had. She loves to give and receive attention and quickly bonded with our other cats.

Two and a half years later, my dad sent me an email to say that he thought Dorothy’s kittens were back on the website.  It turned out that of the three remaining kittens, two were still living at the shelter and one had only recently been adopted.  We drove down that weekend to get Howard and Charlotte and bring them back home to their mom.  It turns out that they weren’t the most social of kittens, probably due to their rough beginning, and they had also had a parasite issue after arriving at the shelter.  I think that as they grew out of their kitten hood, they may have been less appealing to potential adopters.  It sounds like they weren’t the type of cats that would run up to a stranger and try to get attention, so they probably hid in the background as other cats were adopted before them.
It has been about four and a half years now since Dorothy and her two babies were reunited.  I believe she recognized them right away, and they are together constantly now.  They love to groom each other and cuddle and sleep together and I am so happy they are together.  Howard and Charlotte have a good life, but still remain pretty shy.  Charlotte lets me pick her up, but rarely lets my husband pick her up.   Howard will approach us at certain times of the day and certain situations, but it has to be on his terms.  One glorious day Howard had dental work and came home extensively drugged.  He was blissfully unaware of what was going on that day, and I was able to hug and hold him to my heart’s desire.  Then he came to his senses and was back to his reserved self.

Diane asked me to write about Dorothy and her kittens to share how much joy these cats have brought to our lives.  I know we did the right thing in adopting them every time I see them curled up together.  They aren’t feral, but they could have ended up that way.  They also could have ended up staying in the shelter for several more years before someone gave them a chance, simply because they weren’t the cats that were the most approachable. I never have regretted adopting Dorothy and her kittens.  My only regret, and one that makes me profoundly sad, is that we made the decision seven years ago to leave the kittens in the shelter, and only bring Dorothy home that Christmas.  I was nervous that we would end up with too many cats, and we wouldn’t be able to handle it.  When I see Dorothy, Howard, and Charlotte together and how much they clearly love each other, I wish that they hadn’t had those two and a half years apart.  I also wish that the whole family could be together, and hope that her other kittens have found good homes and are well loved.
So please, when you think about all of the cats out there waiting to be brought home to love, consider those shy cats.  Chances are, they really want to be part of a family and will blossom when they learn to trust you.  Maybe you won’t be able to hold them as much as you would like, but they can still bring a huge amount of love and joy into your life.

Posted by Diane Venberg at 10:23 PM No comments:

I sit for some lucky kitties who have a fabulous enclosed "catio" and with permission from my clients, am sharing photos so other kitty guardians can get ideas on how to make safe outdoor spaces their own cats. This back yard is quite small but still contains lots of fun elements for kitties when weather allows for outdoor time. There are plenty of resting areas off the ground so kitties can feel secure. There are no trees large enough for a kitty to climb and jump over (the Japanese Maple will stay petite). This enclosure is designed to be utilized only when their people are home to open the back slider, so there isn't a lock on the back gate but that could be added for extra security. Outdoor time is not only enriching and stimulating but direct sunshine is vital to kitty health. Building a secured area such as this one is a minimal investment that will offer years of enjoyment for your whole family. 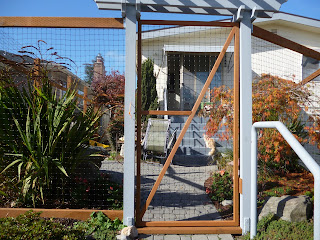 Here's a view of the back door - a slider with a screen door. The screen
has a little cat door in it so kitties can choose in or out when the slider is open. 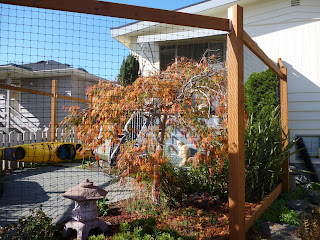 The framing has a nylon/plastic mesh that would be very difficult for a kitty to climb. 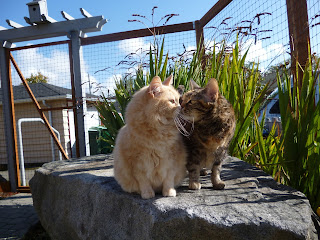 The yard contains several large, flat rock - perfect for Annabelle and Luna to sun themselves on. 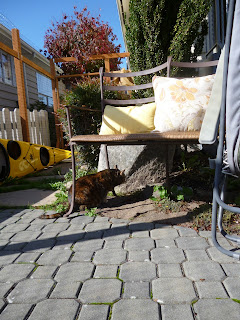 Luna explores the side yard. The bench is another ideal spot for sunning and napping,
as well as for humans to relax.

Posted by Diane Venberg at 4:37 PM No comments: 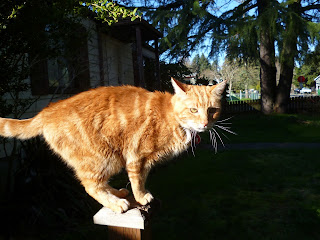 Orange (or red) tabbies are iconic in American culture. They seem to represent a resilient and hard working spirit that many people identify with. Usually male, orange felines are often short-haired and incredibly healthy and hearty. I sit for an orange boy who is 21 years young and still going strong!

I've gathered some inspiring stories specifically about orange kitties who have demonstrated remarkable determination, perseverance, and dedication. These kitties act as ambassadors for all cats; hopefully they change the minds of those who think they don't like cats while enriching the lives of everyone around them.

This tiny orange kitten  was rescued on the road and is enjoying an exciting vagabond lifestyle under the protection of his person before eventually heading home.

Erik the Red's career as a ship's "mouser" is long and impressive. Read about his retirement party: orange cat retires

Tommy saved his person during a medical emergency when he called for help: orange cat calls 911

This story makes you wonder about humans but has a happy ending. Witness two darling and brave orange kittens rescued when they decide to take matters into their own paws.

Bubba is a mascot of sorts for this high school in California. His presence is likely therapeutic for stressed out students: orange campus cat

Posted by Diane Venberg at 10:22 AM No comments: