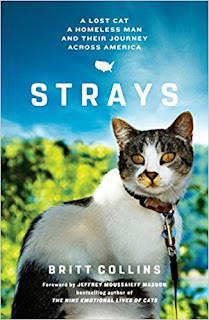 In the sea of books about people rescuing dogs and dogs rescuing people, Strays is a beacon of hope that cats are (finally) getting some literary creed. And thankfully the heroine is not a precious purebred kitty but a tabby mix with a whole lotta chutzpa. Strays is told by a writer gifted with the ability to see the world from both a feline and human perspective. The story focuses on lost kitty Tabor and homeless man Michael finding each other and their evolving relationship. Tabor becomes a well-seasoned back packer and takes all kinds of crazy experiences in stride with Michael by her side. Living on the street and enduring harsh conditions is second nature for Michael, but with Tabor's well-being now at the forefront of his mind he finds himself drinking less and thinking of her needs and security first. What Michael doesn't know is that Tabor's original daddy Ron and cat brother Creto are still searching for her in Portland where Michael started caring for her. While not a very likable person, Ron does seem to be a dedicated pet parent and the reader is able to empathize with his loss.
Strays is important in that it offers a very humanizing glimpse into a homeless person's lifestyle choices. Like community cats, homeless people are usually marginalized and other people often think they know what's best for them. The point is they are individuals and some, like Michael, prefer their freedom and the option to go anywhere at anytime. Tabor is a domesticated cat but not all cats settle into being house cats after they have been out for a while. I believe in trapping community cats (and street dogs) for a vet visit and sterilization; this makes the individual healthier as well as the whole population of cats in a community. This is accepted as the humane and intelligent action in many countries but sadly some animal control agencies as well as organizations such as PETA think death a better alternative than living on the street.  We must remember that each cat put to death is an individual with a distinct personality. If we acknowledge that people have different lifestyles then why can't we do the same with domestic animals? This book also brings up the controversial issue of homeless people "owning" pets.  There are free clinic days for these animals but not nearly enough resources available. Veterinarians have high overhead costs and medical school debt so I don't know what the answer is. (I would love to see subsidized medicare for rescued pets!)

I've commented before that our companion animals are also "therapy animals." They naturally bring out our better qualities that other humans often cannot. To anyone unaccustomed with how deeply enriching and fulfilling a relationship with a cat can be, Strays is a beautiful testament to such a partnership. I highly recommend this book as it gives us several compelling points to think about. It has some lovely, endearing moments and yet moves quickly enough to be entertaining. Tabor is a brave and adventurous kitty who quickly adapts to new environments and i found myself wishing I could meet her in person.
Posted by Diane Venberg at 9:46 PM 1 comment: