Odin gets a Dental 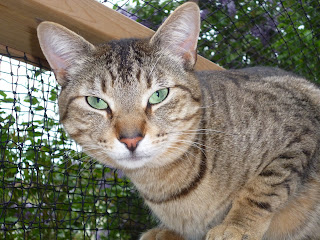 Odin, along with his brother Adian, are very healthy 9 year olds now. Odin's mouth however, was not healthy. I could smell his odorous breath and see how inflamed his gums were just by lifting his lips slightly. He was still eating fine but decaying teeth and gingivitis can cause a number of health problems throughout the body if left unchecked, not to mention there was probably some discomfort. I booked an appointment for the pre-dental exam and blood work weeks ago but had to cancel when both boys reacted very badly to my attempts to lure them with treats and wrangle them into carriers. I had left the crates near their eating areas and sprayed them with Feliway but since the boys routinely allow me only limited body contact I wasn't surprised. Odin does let me cuddle him and actually hold him but Adian does not. Butt rubs are Adian's favorite thing and he flees if I try to pick him up. So I know I would have to step up my game plan for round 2!

I thought about trapping them in my humane traps but the chances of getting them both and not the other two kitties they live with were slim. Plus that would be so traumatic for them that I couldn't do that for an elective medical appointment. I researched the possibilities of cannabis topicals that I could rub into their ears but decided I needed something stronger. The operations manager at Seattle Area Feline Rescue suggested gabapentin, a common (and inexpensive) pain medicine. The veterinarian performing the exam and dental could not prescribe this since it had been over a year since they had last seen the boys; this is a state law apparently. Fortunately our house call veterinarian has seen them and could prescribe this drug and work out a dosage for them. I figured that they needed to receive the drug orally at 5 AM since their appointment was scheduled for 9 AM. This involved placing the capsule in a pill pocket as it's a very bitter drug and couldn't be sprinkled on food. Then I placed the pill pockets on top of meat baby food and sprinkled on some freeze-dried salmon. I monitored each cat to make sure they each ate their serving. It worked - better living through chemistry! I also knew that I needed a second person who is experienced and capable around feral kitties to help me. A wonderful volunteer from Seattle Area Feline Rescue was willing to come at 7 AM to help! It took about an hour and in the end Adian became fractious and I had to go with just Odin. By the time I got back several hours later, Adian was incredibly relaxed and allowed me to examine his mouth. By contrast, he had no redness or odor at all, just some tartar along the back molars. I will work on getting him for an exam at a later date.

Odin had to stay overnight and I was told he refused dinner but he stayed calm in the isolette and didn't injure anyone. His blood work came back as perfect and the staff at Cats Exclusive was able to start the procedure early the next morning. In all, six teeth were extracted, including his two top canines. One canine had a fissure on the gum as it was so infected. He received a Convenia antibiotic injection so that I wouldn't have to worry about getting drugs into him. I had hoped he would allow me to squirt pain meds into his mouth every 12 hours for a few days but he wouldn't let me near him unfortunately. Odin is now back to his full routine and eating robustly, and he has let me check the suture sites just to be sure everything healed well.

Not all cats will need dentals during their lifetimes but in my experience most will if they live long enough. I am a huge proponent of high quality diets but in the end I believe genetics is to blame for "good" or "bad" teeth. I also think you get what you pay for with your veterinarian and skimping by using a bare bones vet clinic  is not worth the cost savings. I remember 20 years ago when I used a local vet clinic (still in business) for low-cost spay and neuter surgeries and they asked me if I wanted to pay extra for pain meds! For an ova-hysterectomy! I hope they don't still charge extra but include it in the fee. A lot of "regular people" don't think of these types of things but rely on the doctors to do what they think is best. It was just last year that I had a client approach his vet to discuss meds for his highly aggressive cat and the vet stupidly suggested euthanasia. That particular doctor needs continuing education but the client also needs to seek out a better vet practice and not accept sub-par health care for his cat. There are always solutions - you just need to ask true "cat people" and be creative. And if you know of anyone looking to adopt a kitty, check out Seattle Area Feline Rescue. Remember, ADOPT, DON'T SHOP!

Posted by Diane Venberg at 5:24 PM No comments: