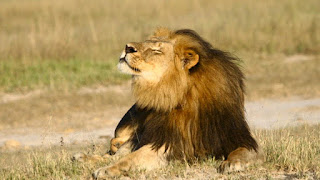 By now, everyone has heard the sad story of Cecil the lion. He was murdered by a wealthy trophy hunter from the U.S. in an agonizing 40 hour ordeal  in Zimbabwe. This man now faces possible extradition and prison time, and may not be able to continue his dental practice in his hometown due to the publicity surrounding this horrific killing. Past charges of illegally killing a bear and paying a very minimal penalty evidently didn't instill a sense of integrity, let alone compassion. The only bright spot is that the general public is now keenly aware of just how disgusting "trophy hunting" is and how precious wild animals are. Cecil was a protector of his pride and like all animals, he had a unique role within his family. He mattered as an individual by acting as an ambassador for Zimbabwe wildlife and within the structure of his lion culture. The entire world has reacted and is seeking some small justice for Cecil and greater protection for other animals. Finally, killing exotic and large animals merely to satisfy a violent and egotistical desire is finally being exposed and society is not accepting it as a norm. The $50,000 Cecil's killer paid to access him could have gone a long way in habitat conservation or sanctuary support for animals who cannot be returned to the wild. (Check out Big Cat Rescue if you want to see gorgeous felines who are no longer being exploited and are peacefully living out their lives in sunny Florida.)

Below is a link to a petition to asking that vulnerable species such as lions be excluded from legal hunting:
petition to International Union for Conservation of Nature

Most people would never dream of hunting any animals as recreation, but when on vacation they may encounter situations involving animals that are difficult to judge. Obviously Sea World and any park or zoo that allows interactions with animals and has them "trained" to do tricks should never be patronized. But check out this website from World Animal Protection to learn more about tourism and animals. WAP also has an animal-friendly travel guide you can download. Your dollars speak so spend them wisely to help animals!
Posted by Diane Venberg at 4:58 PM No comments: