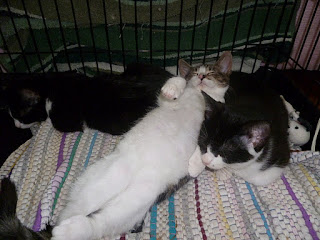 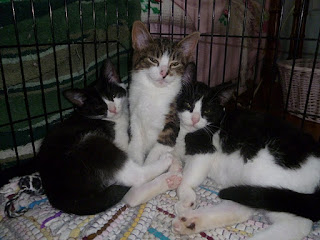 Thanks to everyone who helped socialize Rebel, Liam and Ruth-Anne! As precious as these babies are, spay/neuter is the only way to drive numbers of homeless and "euthanized" companions down. Accidental litters happen all socioeconomic levels; witness one of my friends who works at a major employer on the Eastside with highly skilled and highly paid employees. One of her coworkers was giving away free kittens their cat gave birth to for a second time! She counseled him about having the cat spayed and perhaps fostering for a humane organization if he wanted his children to see kittens. Unfortunately she was told to mind her own business and that "having kittens isn't against the law." No, it isn't against the law but neither was dog and gamecock fighting in many parts of the country until very recently. Until just a few years ago owning an exotic wild animal as a "pet" wasn't illegal in Washington State either (ie. the shocking and sad incident in Ohio last month where these animals were legally kept by a private individual). If you have friends or family who insist on pedigreed companion animals, tell them that a good portion of the dogs and cats sitting in shelters ARE purebred and buying from a breeder just continues to support the burden "kill shelters" bear. It's up to people who care about animals to speak up, advocate for them and keep fighting the good fight!
Posted by Diane Venberg at 3:26 PM