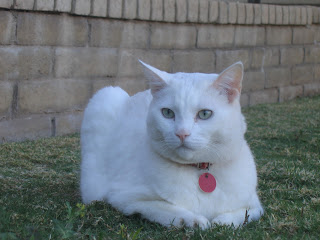 Emily, my Mom's kitty
I love all kitties of course but white kitties are especially magical to me. Maybe it's the combination of pink ears and nose and usually pale green or blue eyes. Perhaps because totally white kitties are far more unusual than many other color variations such as black, tabby and tuxedo. It's rare to find white cats in feral colonies for obvious reasons; "moggies" (striped tabbies) are the ideal pattern that allows for survival in the outdoor world.
Here's a short, heart-warming story about a true hero who happens to be a white kitty. Enjoy!
http://halopets.com/freekibble/donation90.html
Posted by Diane Venberg at 9:56 AM No comments:

Hot coffee or tea, a delicious sweet and and a sweet kitty to hang out with - isn't that the best part of your day some days (most days maybe)? Some poor unfortunates can't actually live with a kitty or perhaps like me, they just can't get enough feline affection, so here's the ideal business! If anyone reading this is interested in investing, I'd love to chat about opening a shop just like this. Seriously, call me!
Posted by Diane Venberg at 4:50 PM No comments:

Maintaining a feral cat colony (in which all the kitties are sterilized and vaccinated against rabies of course) is so hip that New York City architects are getting their grove on designing housing for these cats! Most colony caretakers I know utilize the old plastic storage tub from Fred Myer with a doorway cut into it with a jigsaw and the sharp edges covered with electrical or duct tape. Straw, wool sweaters or fleece make good insulation. Or they find Styrofoam shipping crates on Craigslist and easily cut doorways into those. Pretty much any box made of waterproof material that you can cut at least one door into (two is ideal if it's large enough) will work. But for caretakers who want to unleash their creativity, here are some cool cat cubby ideas.

Posted by Diane Venberg at 5:41 PM No comments:

Not so feral friendly

You've probably already seen the NY Times article attributing the deaths of over 14 BILLION birds and small mammals in the U.S. every year to  free roaming cats.  The American Bird Conservancy and the Smithsonian Conservation Biology Institute have been trying to dissuade the growing number of humane organizations advocating trap/neuter/return (TNR) of cats who are not considered adoptable to the average person seeking a "pet" cat. These cats may be truly feral (never socialized to humans) or simply accustomed to living outdoors due to a course of events in their lives. My point being that they are individuals and do indeed have preferences and agency when allowed. Taking into account that a percentage of cats are cruelly abandoned and would relish the opportunity to become a 100% indoor couch potato again given the chance, plus tiny kittens (preferably 5-6 weeks of age) born outside who can still be socialized and offered a plush indoor life, other cats will only be happy and sane outdoors with minimal human interaction. It's rarely a black and white issue although "scientists" do their best to make it appear so.

News of note that was omitted from the original story is that one of the Smithsonian researchers was actually arrested for poisoning cats outside her work site and apparently also acts as spokesperson for a zoo, which I think speaks volumes about how she objectifies and perpetuates the exploitation of animals. The NY Times piece follows, along with a very impressive follow-up by a cat advocate.

It's heartening to remember that spay/neuter clinics, such as the Feral Cat Spay/Neuter Project here in Puget Sound, are breaking records every year achieving higher numbers of surgeries performed on both owned and free-roaming kitties, and there's a bill being heard in our state capital this week that would enable more low-cost surgeries for dogs and cats in WA. So people want to work towards a no-kill community; the feral and free-roaming felines just need a little extra help from those of us who "get it."


Posted by Diane Venberg at 6:06 PM No comments: