Pity the Kitties in Edmonds, WA

The first I heard about an outright ban on outdoor cats appears to be a done deal in Edmonds, WA. This archaic attitude towards free-roaming felines smacks of intolerance and ignorance; evidence proves that catch & kill does NOT work the way that trap/neuter/return does to control populations of community cats. Even worse, the city of Edmonds apparently won't even give a break to obviously domesticated kitties wearing collars and tags sunning themselves out of doors. Frightening to think that one of my cat's favorite activities, peeing outdoors just because he can, would become a life or death proposition if Big Brother were watching.

Looks like Edmonds city council members have no compassion for felines OR for those individuals seeking medical marijuana to alleviate their pain, as there is an existing moratorium on dispensaries. Guess progress can be scary for some folks. Next, the city councilmembers will be hating on squirrels, crows and blue jays. And pesky little children. Fortunately I live in Seattle and never need patronize any businesses in the small minded and hateful city of Edmonds.

Just as there are not strictly indoor or outdoor cats, remember that not all free roaming felines are feral cats. Check out the article below for a recap on how you can tell subtle differences amongst kitties you might encounter. 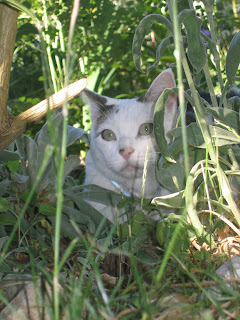 Posted by Diane Venberg at 9:26 AM No comments: