As an ode to Halloween, check out this Finnish photographer who captures other-worldly images of wildlife in abandoned country cottages. What a perfect spot once winter hits.

The Rewards of a Rescued Kitty 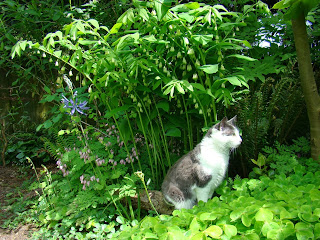 Dorothea, pictured above in her back yard, is a bright, beautiful kitty who might easily have become a free-roaming feral cat living on the streets of Seattle. She was clearly abandoned and hanging out with two older, friendlier male cats. I came upon Dorothea when I met up with friends for lunch. We inquired at nearby apartment buildings and the people we chatted with said they had seen the cats outside for days and that the cats didn't seem to belong to anyone. A rental house that had recently been vacated posed a possible answer as to where the kitties had been living. We will never know if the three had lived together prior to losing their homes or formed an impromptu family when they discovered each other. The boys were easy to pick up and put into carriers to transport; Arthur, the kitty whom Dorothea still lives with to this day actually implored us to help them all. "Little Doe" was frightened however and we had to resort to a humane trap to safely removed her from the alley.
All three kitties went in for health checks and neuter/spay. One of the boys was a handsome Siamese and not as bonded as Dorothea and Arthur were. He was adopted out to a couple. Dorothea and Arthur remained in their "foster home" and eight years later I am thrilled to sit them when their daddy goes out of town. While Arthur may have been taken in eventually by a neighbor, he also may have faced sad and hungry times ahead as a former companion kitty accustomed to an indoor life now living outside. Dorothea however, being shy and lacking Arthur's outgoing demeanor and human experiences would likely have become a feral cat. "She was so damaged by the experience of being abandoned at that tender age that she almost gave up on accepting human contact," says her daddy. He patiently extended unconditional love, safety, warmth and quality cuisine and she blossomed into a sweet and precious little soul. Dorothea's story reminds us to treat each kitty as an individual and never accept the black and white dichotomy of the term "feral."
While some feral felines are born outside and never socialized to humans, others have lived in homes as companions yet are forced outside due to no fault of their own. Sometimes unfeeling people will take a dog with them when they move yet put the cat (or cats) outside and drive off. Was the trio we rescued waiting for their guardian to return or had they reached a point where they simply did not know what to do or where to go? Truly feral cats can have a quality life with a regular caretaker who feeds them daily and provides shelter and health care when necessary. But no cat, especially an indoor cat who has depended upon his person for everything, can live a safe existence completely on his own in a busy city environment. National Feral Cat Day is October 16th and an excellent time to educate others about free-roaming cats and being a responsible cat guardian.