Why is October 16th National Feral Cat Day? Because that's the day Alley Cat Allies officially became a non-profit 25 years ago. This group has done incredible work for cats, from hands-on rescue after Hurricane Katrina to challenging laws and government policies that are deadly to cats. They offer a National Cat Help Desk hotline: (240) 482-1980, ext. 330. ACA hosts an online Veterinary Resource Center so that veterinarians themselves can then help community cats and the folks who care for them. By providing grant money and education on how to implement low cost/high volume spay/neuter, they partner with shelters across the country to stop the killing of cats turned into county shelters.

I think ACA is not only helping how our systems in place handle stray and community cats but how many people view them. The vast majority of animal welfare and animal protection groups have embraced trap/neuter/return as the proven and humane method of allowing community cats to live out their natural lives without suffering endless breeding cycles and all the issues Tomcats bring to the table. In my experience however, it's usually one special animal who acts as the catalyst for people who have a shift in their thinking. My client Beth has been a devoted kitty mom her whole adult life, and while all her kitties were rescues they were usually indoor cats. Here is her story of BK, a feline on his way to being feral after being abandoned outside to fend for himself. BK is still a bit of a wild child and he is loved just the way he is!

In the spring of 2010 a bedraggled little black long-haired kitten wandered into my yard. He was matted, dirty, had “stud tail”, & was scared & hungry. So of course I started feeding him. In the beginning, he wouldn’t come anywhere near me. I was patient & talked to him in soothing tones telling him it was OK to come eat. At first he would only eat in the yard & watch me. Then after months went by, I managed to get him to come closer & closer until he came on the porch where I made him a bed. I named him BK.

Our first breakthrough happened when BK sniffed my hand, then finally allowed me to pet him a little. It took lots of food & kind words to finally get him to trust me. As soon as I thought he wouldn’t freak out, I got him into a cat carrier & off to the Vet we went! Pronounced healthy, he was neutered & got all his shots. As I like to say, “$367 later he was “mine.” I honestly thought he might take off but he didn’t & still lives with me & my other cat. He’s still a bit wild & is the only allowed outside during the day because he was “homeless” for the first year of his life & screams to go out. Little by little he’s staying inside more & always stays in at night where he sleeps on the bed next to my head unless he’s on one of the kitty perches or on top of the armoire (his favorite spot!)

I think BK came from ”down the street” as I know there’s another cat who looks just like him who lives with some neighbors who rescued her around the same time. She’s also named “BK” (Black Kitty). Even though he can be a handful sometimes & is a bit of a bully, he also has turned into a very affectionate cat with a big, rumbling purr. He’s still afraid of anyone he doesn’t know but he seems to love me & I love him. 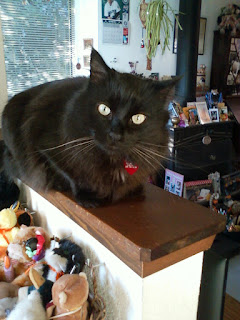 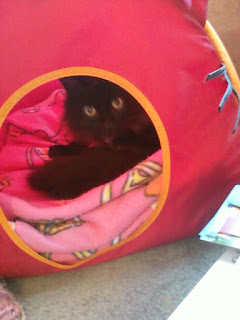 Posted by Diane Venberg at 5:48 PM No comments:

Labels: The story of BK


Posted by Diane Venberg at 9:42 PM No comments:

Posted by Diane Venberg at 9:26 PM No comments: