I've had an incredibly busy summer taking care of kitties all over Seattle! I do find time to read, usually while taking a dinner break with my own kitties. I'm a fan of Wayne Pacelle's first book, The Bond, so was happy to find his latest book, The Humane Economy, at my local library. I keep up on a variety of animal issues but actually learned a lot from reading this. There is good news re. animal protection but remaining vigilant in what companies and practices you support with your consumer choices has never been more important. Wayne's coverage of SeaWorld, trainer deaths by killer whales and the hailstorm resulting from the film "Blackfish" gives us hope that people will eventually stop spending entertainment dollars to see couped up marine mammals. If you have ever wanted to go on safari, Wayne discusses which countries to travel to in order to view splendid wild animals and which places still need to curb the poaching and trophy hunting they allow.

Greyhound racing is one issue I've seen gain momentum very quickly over the last few years; 19 tracks still operate in six states but I believe we will see these tracks close up as well in the newt 10 years. People have probably met lovely "retired" greyhounds in their neighborhoods, are more educated about what the dogs endure and are less likely to support the tracks. Animal based circuses are another. Consider that Feld entertainment (Ringling Bros.) decided to retire their elephants from life on the road (yes!). With cities such as Redmond and Port Townsend banning performing wild animal acts and reduced attendance in Seattle, these shows were finding it difficult to justify their costs.

In the U.S., the number of companion animals killed in shelters each year has dropped by 80% since the 1970s to 3 million. PetCo and PetSmart have made an impact by featuring animals from rescue groups instead of breeders and puppy mills. Wayne discusses certain shelters that had historically high kill rates and how they worked to turn their numbers around to very high "save rates." He gives a brief mention of trap/neuter/return of community cats but I suspect that TNR efforts are making much more of a difference in shelter kill rates where volunteers have taken on the long-term goal of sterilizing street cats. Fortunately Becky Robinson has written all about how TNR is affecting change for cats in her new book, The Evolution of the Cat Revolution, available here:
Alley Cat Allies

Wildlife management in the U.S. is another area Wayne covers and we should listen since our tax dollars are going towards the killing of tens of thousands of coyotes, mountain lions, bears and wolves. Why does the federal government kill these animals? To protect ranch raised farmed animals, usually grazing on public lands. All this ties in well with the information about how said ranchers and producers are being swayed to change their methods to (slightly) more humane accommodations for the animals who end up on the dinner plate. Companies such as Chipotle caused a chain reaction with giants like McDonald's and Walmart following to eliminate sow crates and offer egg laying hens a tad more room in their cages. Again, your consumer choices make a difference and it's pretty easy in Seattle to find alternatives to cheap meat and dairy products. Humane Society of the United States has led the way with farmed animal reform laws in individual states as well as helping expose cruelty within farming operations.

Wayne writes, "...we need to broaden our understanding of moral responsibility to animals. Cruelty isn't limited to practices that we in society hold in general contempt, such as beating a dog or setting a cat on fire, or even long-established but now widely reviled activities such as dogfighting or commercial whaling. The abuse of animals is also embedded in economic enterprises that provide staples in our daily lives. Because it's both routine and invisible, and we play no direct role in the violence, we generally consider it a moral problem not of our making. Our physical removal from harmful actions towards the animals provides a sort of buffer. Yet as end users, we enable it, just as we have the power to deny it by abstention. It is only consumers who give these products value, or, conversely who can make them worthless in the marketplace." (pg. 256-257) The ways in which certain animals are marginialized and others are considered members of are family is interesting in many ways; in my experience it is often once special animal who changes a person's perceptions.

Check out Wayne's blog and how you can purchase the book (remember to boycott Amazon until they stop selling body-gripping animal traps and foie gras!):
Humane Society of the United States 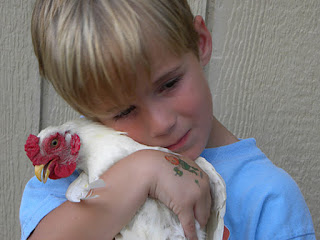