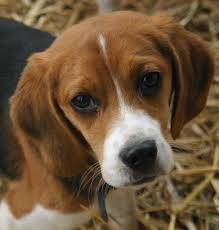 Check out this heart warming video of nine beagles released from a laboratory after spending their entire lives in cages. They can now run, play and experience the simple pleasures denied to them as "research subjects." Lucky pups!

Although I am obviously a confirmed cat person, I grew up with a beagle named Lucy so this story in particular touches me. Much to the dismay of the man who purchased her, Lucy was gun shy and of no use to him so he gave her away via an ad in the newspaper. As a hound, Lucy used her sense of smell to navigate and understand the world. I remember times when she wandered away just because she was following her nose. We would find her and drag her back home. Lucy eventually went deaf in her old age but I doubt that bothered her much because she was also afraid of thunder and being deaf meant never having to hear those scary noises again. She was spoiled and treated like a member of the family of course.

If the idea of supporting animal research, be it on companion animals, monkeys or mice, bothers you like it does me please check out the link below for charities that do NOT exploit and torture animals. If you are solicited for a donation from say, Fred Hutchinson Research Center here in Seattle, you can look at this list and confirm that they do unfortunately fund animal research and find an alternative group to support.
http://www.humaneseal.org/

There are many methods that do not involve live animals and in fact many countries such as the UK have banned many forms of animal testing. Learn more here:
http://www.pcrm.org/research/animaltestalt/animaltesting
Posted by Diane Venberg at 12:42 PM No comments: